Yaskawa, a long-term customer of HUI, generally caters to a high-end, industrial market. However, in September of 2014, they decided to broaden their market and supply to entry level price points. To satisfy this, they needed to create and manufacture a more cost-Effective enclosure.

Team members from both HUI and Yaskawa collaborated over this project, starting with agreeing on a price point, the first of which had been rejected. However, compromises were made, and the project was able to continue. Typically, Yaskawa creates drawings and models in-house before sending the project out for a quote and prototype. However, Yaskawa’s usual process would have taken too much time and wouldn’t have been able to complete a prototype, have it tested and finalize the drawings before the preassigned launch date. It’s relevant to note that this couldn’t be easily resolved by making the drawing at HUI because the customer’s processes still needed to be upheld, not to mention the tedium of attempting to satisfy the customer’s criteria without real-time communication.

To resolve these issues, Wayne Schad, a HUI design engineer, agreed to build the models, drawings and a functional prototype at HUI, which had been completed in about four weeks. Once the prototype was tested and approved, Wayne then created Yaskawa standard drawings. Not only did this mean that a HUI employee would have to commute to Yaskawa on a daily basis for five weeks, but this also demonstrates the amount of trust held between these two companies to allow a non-Yaskawa employee to have access to required files while building the drawings and using the models previously created at HUI. Wayne had to transfer information, relink all models and create Yaskawa standard drawings using their title blocks and specs. This gave him the opportunity to work directly with several Yaskawa engineers and learn more about their overall design process. 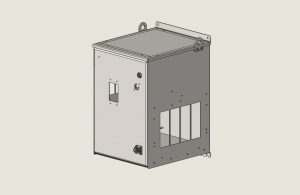 Because both teams collaborated and compromised by allowing unique practices in opening their company’s programs and files to an outside source to expedite their project and make the lead-time, this project was successful. Yaskawa was able to attain their launch date in December of the same year, and this product is still being manufactured and sold into the desired market. Overall, this enclosure saves around 30 percent. Again, this project was only successful because of the trust and willingness to work together exemplified by both these companies.

Do you have an industrial redesign in mind  but don't know where to start? Contact us today to find the perfect solution that fits your company.

On-the-Spot Cobot is a Welding Jackpot for HUI Manufacturing
5 Design for Manufacturability Mistakes to Avoid
Schwarz, Jandrey to fill new roles at HUI