Who doesn’t love the arcade with its bright lights, games and promise of winning—competition without the shouting of coaches and parents: racing simulations, air hockey and who could forget the shooting games—deer and basketballs alike? 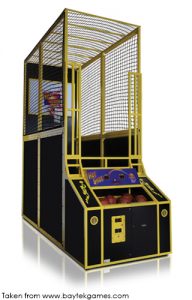 Like most people, you’ve probably been to an arcade with a game similar to Bay Tek Game’s Hot Shot—a basketball game where you have to make as many baskets as possible within a certain timeframe. In 2016, Bay Tek Games acquired Skee-Ball Amusement Games.

Because this opened new market possibilities for them, Bay Tek Games, who had worked with HUI in the past, realized they would need a manufacturer with engineering capabilities stationed in the Midwest. For this reason, and due to a mutual customer within their village of companies, Bay Tek Games chose to rekindle their working relationship with HUI to improve their product: Hot Shot.

This case study will discuss how Bay Tek Games collaborated with HUI to reduce costs and improve the assembly process of Hot Shot.

The initial product was built using metal tube frame weldments, requiring fixtures to hold everything square and to its overall size. The weldments were difficult to manufacture while maintaining a consistent tolerance in both squareness and feature location. These manufacturing inconsistencies caused many assembly issues and were not cost effective.

The original manufacturer would assemble each Hot Shot game in-house, disassemble and ship it. However, the tube frame design left little clearance in many critical assembly areas, so the product never quite fit together the same way twice. The preexisting holes rarely lined up, which required the final assemblers to ream those holes before they could fit the hardware through.

This obstacle was but one of a plethora that the assemblers faced when setting up the initial Hot Shot design. The metal tubing weldments and wooden panels made the assembled panels bulky, heavy and logistically awkward to handle. Overall, assembly of the original Hot Shot took three to four hours and a minimum of three people.

The first steps to redesigning Hot Shot came down to removing all metal tube weldments, which included wood panel inserts and replacing them with sheet metal. HUI engineers broke the game down into smaller, more manageable panels and designed them with fixed hardware and clearance slots to ease assembly. They designed the sheet metal parts to include integrated fasteners and hardware of like sizes, so fewer tools were needed. Also, they reduced the number of required fixtures to two. These few seemingly simple steps helped accomplish both goals of cost reduction and ease of assembly. The use of slot-in-tab locating features within the weldments, locking weld nuts, flanged hardware, SEMS screws and like-sized hardware reduced both the amount of hardware and tools significantly.

Overall, the Hot Shot redesign was extremely successful. HUI’s solutions for multiple issues significantly impacted the ease of fabrication, assembly and overall quality of the game. Now Hot Shot can be assembled safely in under two hours with a minimum of two people and only a handful of tools (and no reaming!) End users and assemblers around the nation have given Bay Tek Games very positive feedback regarding these alterations made in the redesign. In addition to this, Bay Tek Games recognized
ten-percent on cost savings on each unit.

Due to HUI’s success in Hot Shot’s redesign, Bay Tek Games has contracted HUI to redesign another product previously produced by Skee-Ball. Both companies look forward to a successful and prosperous working relationship.

"Assembly time has been dramatically reduced compared to the Skee-Ball version. We have install down to approximately 1.5 hours (6 man hours). The logical ordering and stacking of panels on the pallets is a huge help and construction is solid."

At HUI, we take pride in our ability to find and create solutions for our customers. If you have any industrial design or redesign projects, contact us today.